Here in this article you will find the symptoms, causes and treatment of the bite of most dangerous species of spider that is Brown Recluse Spider. This spider has many names like Brown Recluse Spider, American recluse spider, Fiddleback spider and Violin spider.

The brown recluse spider is most common in the south and central states of the United States, especially in Missouri, Kansas, Arkansas, Louisiana, eastern Texas, and Oklahoma. Brown recluse spiders are about six to twenty millimeters long. They have different color, their color range include light tan to dark brown and few are of dark yellow color.

Brown recluse spiders are found in Closets, at the sheds, garages, cellars as well as in woodpiles. They are mainly located in dry and old places. They can also present in cupboards, beds, in the shoes or behind wall hangings.

Brown recluse spiders usually bite when it feels threat from the surrounding. Its venom is more dangerous than that of snake. Children are at more risk because of their low immunity to toxic materials. It may cause death among those with weak immunity. 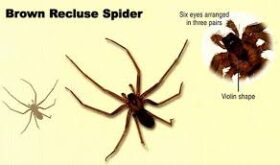 Spiders do not feed on humans and typically bites occur as a defense mechanism. Most spiders have fangs too small to penetrate human skin. Most bites by species large enough for their bites to be noticeable. Spider venoms include combinations and concentrations of necrotic agents, neurotoxins, and pharmacologically active compounds such as serotonin.

Brown recluse spiders are venomous which may cause severe skin and tissue damage after several hours or days which occurs in Phases. 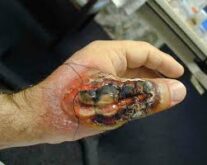 When the spider bites there is an enzyme Sphingomyelinase D in the venom that starts damaging the tissue. This triggers  the immune system which starts to remove the toxic material. It causes inflammation of tissues, formation of pustules in many cases as well as formation of blisters.

In next phase this enzyme tend to break your red blood cells that stops the supply of the oxygen to the muscles that will stop the function of the body. Then the area turns into grey color and small hole also formed that indicate the site of spider bites. 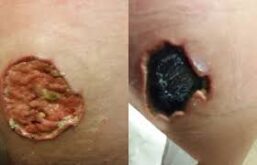 Last stage is also known as loxoscelism stage. Here venom reached at blood stream through capillaries and start to affect the body.

The main symptoms of Brown recluse spider bite include:

Formation of blisters with the stinging feeling, redness in the affected area, swelling and pain. Some people have a severe, systemic (whole-body) reaction to brown recluse spider bites, including the rapid destruction of red blood cells and hemolytic anemia so other symptoms include itching, cold, vomiting, pain in muscles as well as weakness, affected area becomes inflammed as well as person feels tired. These are the prominent symptoms that are seen in the person affected by this bite.

Before going to treat this you must need to know that what type of spider bites you, then take a proper treatment as soon as possible. Below are the some treatments that you need to do for Brown recluse spider bite.

Untreated spider bites may results more serious problems like swelling and infections. Or sometimes infection may spread to other body parts become life-threatening. So seek medical treatment soon ffrom your physician to prevent any complication.

I hope the above article may prove useful. Comment your queries and views with us.