Learn all about bromhidrosis meaning, definition, symptoms, medications and surgery. Bromhidrosis is a disease presenting as malodor caused by interaction between the discharge of apocrine glands and bacteria.

Bromhidrosis results in sweat that smells sharp, musty or stinging. Furthermore, there is production of too much sweat, which also interferes with everyday living. Apart from foul and heavy body odor, the axillae are the area where the body odor comes alive. Other areas that can be impacted include feet soles and genital areas. Odor can be different for various people. But the most common types range across pungent, musty, acrid or rancid. Skin however, appears normal unless a dermatological condition like erthyrasma is responsible for the BO. In the event of eccrine BO, skin maceration may occur where the keratin or body protein is consumed by bacteria. Moreover, there will be a thick layer of moist and wet keratin which can be physically detected. Also, modifications appear in the areas of the skin and soles of the feet where the skin is rubbed constantly

Firstly, bromhidrosis is noted in those with medical or familial history of the same. Gender is another factor, where men are more prone to BO than women. Also, those infected by Corynebacterium bacteria can also be chronic sufferers of this condition. Even those who suffer from metabolic disorders like amino acid disorders can undergo this condition. Eating certain foods like spices, curry or garlic is equally liable to lead to this condition. Alcohol ingestion is also correlated with bromhidrosis. Body odor is caused by bacteria breaking down sweat and is largely linked to the apocrine glands. Most body odor comes from these.

These glands are found in the breasts, genital area, eyelids, armpits, and ear. In the breasts, they secrete fat droplets into breast milk. In the ear, they help form earwax. Apocrine glands in the skin and the eyelids are sweat glands. Most of the apocrine glands in the skin are located in the groin, armpits, and around the nipples. In the skin, they usually have an odor. They are scent glands.

A study in 2003 showed that people who had Botox injected into their armpits experienced a decrease in body odor. Researchers believe it prevents sweat glands from working. No sweat equals no body odor. The main therapeutic modalities are applying topical agents, liposuction surgery, and elective surgery. Among these, elective surgery is reported to be most effective. However, the efficiency largely depends on surgical technique. 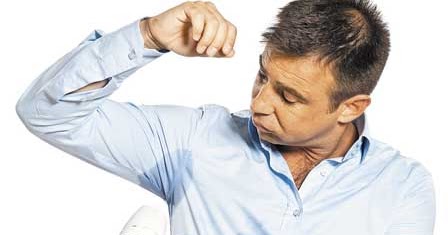 Bromhidrosis is a medical condition where the body releases bad-smells in conjunction with sweat. Perspiration itself lacks odor. It is only when sweat comes into contact with bacteria on the skin that smells emerge.

Bromhidrosis is an abnormal condition in which the apocrine sweat has an unpleasant odor. The odor is usually caused by bacterial decomposition of perspiration on the skin. It is also called body odor.

These are the most common symptoms of bromhidrosis:

Bromhidrosis surgery can be useful when self-care and medicinal measures are not effective at treating severe body odor, a doctor can perform a surgical procedure called endoscopic thoracic sympathectomy (ETS) that destroys the sweating-controlling nerves below the skin of the armpits. Procedures include: