Basophilic stippling, which is also known as Punctate Basophilia is referred to as a blood related condition or a disease which is inherited in a person by birth. It is an abnormal observation which comes to fore in a blood smear test. This anomaly in the smear test indicates towards possible lead poisoning in the individual/ patient. 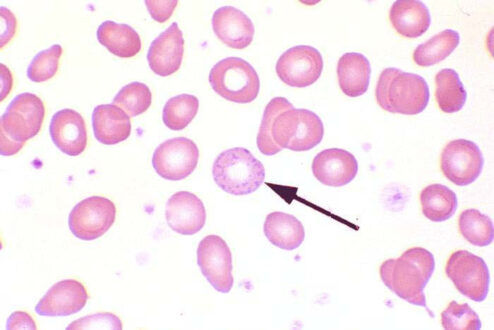 What is Basophilic stippling?

Basophilic stippling is the aggregation of residual RNA by the Wright’s stain. Usually with Wright’s staining, RNA remains diffusely distributed in the cell (a polychromatophilic erythrocyte). Basophilic stippling or punctate basophilia means the presence of numerous basophilic granules distributed throughout the cell in contrast to Pappenheimer bodies they do not give a positive Perls reaction for ionised iron. Punctate basophilia has quite a different significance from diffuse cytoplasmic basophilia. It is indicative of disturbed rather than increased erythropoiesis. It occurs in many blood diseases: thalassemia, megaloblastic anemias, infections, liver disease, poisoning by lead and other heavy metals, unstable haemoglobins and pyrimidine-5′- nucleotidase deficiency.

Basophilic stippling, also known as Punctuate basophilia, can be defined as distinct or diffuse, fine to coarse, dark granular patterns in the erythrocytes, representing aggregated ribosomes and caused by ineffective heme formation. It is a condition observed in the erythrocytes (red blood cells) while examining blood smears under a microscope, where the cells display small dots at the periphery. These dots display the abnormal collection of nucleic acid/ribosomes of the cells, which can be an indicator of a disease. However, it can sometimes be found even in normal individuals. Basophilic refers to any cells that are stained with a dye, and stippling refers to any object which is covered in dots. This phenomenon can only be observed if the blood smear had been stained with a special alkaline dye, which reacts to molecules in the cell which are negatively charged, resulting in coloration. Such staining makes stippling easy to see when magnified under a laboratory grade microscope.

In basophilic stippling treatment clinicians need to take a proactive role in early detection and prevention by screening patients known to work in occupations with possible lead exposure, and need to know what actions to take when excessive exposure is found. The costs and consequences of lead poisoning can be dramatically reduced if not entirely prevented by eliminating and decreasing sources of exposures and by early recognition of elevated lead levels or lead poisoning. The medications used for this treatment destroy extra blood cells in your body.