Polyps are the benign growths of the nasal cavity which can enlarge enough to be visual in the oropharynx. Generally there are two major types of nasal polyps including;

These kind of polyps originates from the ethmoidal sinus and grow through the middle meatus into the main nasal cavity.

These may originate in multiple number and grow comparatively in smaller size.

It is a nasal polyp characterized by “benign solitary abrasion which originates from the mucosal layer of the maxillary sinus and further grow in maxillary sinus reaching to choana leading to nasal obstruction as a major symptom of this disease”.

Meanwhile antrochoanal polyps grow alone as one entity and larger in size in comparison to ethmoidal polyps.This kind of polyp is most common among children and accounts for approximately one third of the population. It represents about 4-6% of all types of nasal polyps. 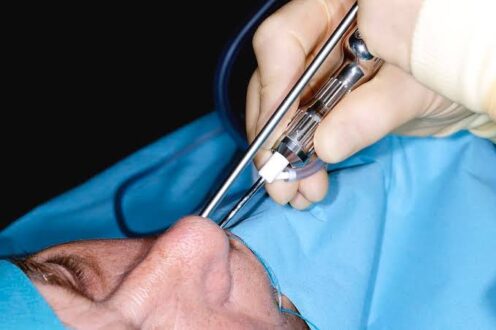 The signs and symptoms of this disease are well established which appear at the time of origination and allows the proper diagnosis of the disease. These symptoms are prominent enough to distinguish the different types of polyps and helps in the choice of the proper treatment option.

The most common symptom is the nasal obstruction which is caused initially in this disease. Meanwhile in children this symptom appear in association with the excessive nasal discharge. Other associated symptoms may include;

The major underlying cause of the nasal polyps are still unknown leading to further research on this topic to come out with some proper outcomes. However it is reported that the long term inflammation of the sinuses may lead to the polyp’s adoption. So any of the factors such as; chronic rhinosinusitis, asthma, aspirin sensitivity and cystic fibrosis, which leads to the inflammation are may considered as the risk factors for the adoption of this disease.

There are some other diseases which may lead to the formation of the nasal polyps;

Apart from these diseases the most important risk factor is considered to be the anatomical anomaly which include;

Basically, recurrent infections or inflammation of the sinuses are considered as the major triggers for the nasal polyps. Initially, abnormal excretion of the extracellular fluid resulting in the swelling of the middle meatus leads to the formation of polyp and lately outgrow into the nasal cavity. Sessile kind of polyps may result in the pedunculated forms due to the effect of gravity.

Another pathological procedure can be described for this disease which is initiated from another risk factor known as NSAID sensitivity especially intolerance of the aspirin. This class of drugs is the cyclooxygenase inhibitor that leads to the shutdown of products through lipoxygenase pathway causing the ultimate inflammation. These inflammatory product’s release in the airways and cause the diseases like asthma and polyp formation.

The treatment of choice for the nasal polyps is chemotherapy and more specifically the use of topical steroids.

But this treatment option has many side effects which limits its implementation in the patients leading to the need of better treatment options. Despite of the side effects, some patients cannot be started on chemotherapy due to the seriousness of the condition,involving; complete nasal obstruction, uncontrolled runny nose, nasal deformity and failure of other medical managements, which requires the immediate provision of the solution.In this condition endoscopic sinus surgery involving the removal of polyps is considered as a very effective option resulting in the rapid relief of symptoms.

The surgery is performed under the effect of general or local anesthesia and lasts for approximately 45 minutes to 1 hour.The use of oral steroids prior to the surgery is recommended by the physician in order to reduce the chances of mucosal inflammation, minimize the bleeding during surgery and visualization of the polyps.This is not merely performed to remove the obstruction but it also helps in the administration and proper transmission of the medications such as saline irrigations and topical steroids to allow the effectiveness.

However, a proper follow up is recommended after the provision of a combination management of chemotherapy and surgical methods for the treatment of nasal polyps.